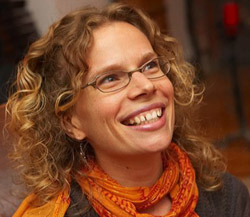 CC Treadway (Hudson Valley, NY)  was born in Mt. Kisco, NY in 1974.  She studied at the Rhode Island School of Design and graduated with a BFA in Film/Animation/Video. She went on to study dance in New York City at numerous studios, including the Alvin Ailey School of Dance. After a debilitating injury, she moved to Miami and began editing music videos for Latin America for such stars as Juanes and Thalia. She then went on to work as an editor for the Discovery Channel Latin America, winning a BDA ProMax award, while beginning her studies at the 4 year healing college, The Brennan Healing Institute, in addition to her training at Kripalu Center for Yoga and Health in Massachusetts. Her editing career continued in New York City where she worked for major cable networks like MTV and VH1. For 6 years she was a staff writer for the online magazine, The Spirit of Maat for renowned spiritual teacher, Drunvalo Melchizedek. She also edited the acclaimed musical documentary about the Tuareg, Footsteps in Africa: A Nomadic Journey with South African director, Kathi von Koerber.  While traveling around the world to participate in ceremonies with indigenous cultures, she fell in love with the desert, left the corporate world  and moved to Sedona, AZ to deepen her connection to nature. She returned to Brooklyn in 2011 where she co-created events with the artist collective, Unitribe. In 2015, she debuted her one-woman-show iLuminarias, combining storytelling, original music, sacred music and meditations as well as an online listening/learning experience at the Sacred Arts Research Center in Brooklyn, NY.  Based out of Miami, she was accepted into the Thom Sessa Invitational Gospel Choir. She performed with TSIC all over South Florida for 3 years. She also commuted to Kiawah, South Carolina to do healing work with the elderly with acupuncturist and D.O., Heather Wilkinson, and continued to teach and practice in Sedona as well as New York. She currently lives in the Hudson Valley in upstate New York, where she continues to paint and perform, with artists such as Radharani, at venues including Ananda Ashram, Omega Institute and the Ahimsa Yoga Festival.